This HTML editor was originally developed as NaviPress in the early 1990’s. In 1993 America Online Inc acquired the package from Navisoft Inc and renamed it as  AOLPress.  It had wide appeal though it only conformed to early HTML standards and when the version 3.2 was introduced AOLPess was not up-dated. It did not support Portable Network Graphics, PNG, which was becoming increasingly popular and therefore it declined in popularity as the new millennium was unfolding. Of course, in the past decade, social communication channels have expanded onto the internet “waves” alarmingly — Facebook, Twitter, Linkin, Dribble and Behance — and AOLPress makes no reference to these. To be fair, however, AOLPress was used by millions of people and it was a user-friendly method of producing a website. 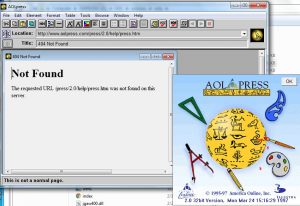 When the package was opened one was presented with a worksheet and logo. After a few seconds the logo disappeared and work could commence on the site. Paragraphs could be typed or pasted onto the work sheet and images could be introduced by the “Element” tab as follows. 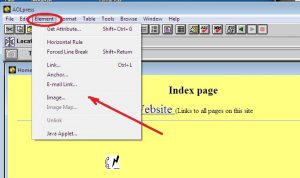 A disadvantage on this image placement was that the image was not visible as one was building the page and was only revealed when one went on-line to visit the site. ( As the image above shows, a picture is situated at the position of the icon ) .

Links are also activated from the “Element” tab as below 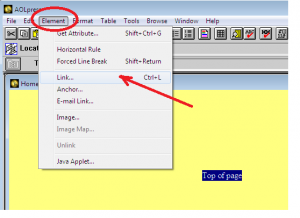 In this case there are NO HIDDEN FEATURES !  One types “Top of page” and then highlights the typed letters. “Link” is now pressed and the URL ( for the present page) is typed in the “Location” line. A link is confirmed as the typing becomes BLUE and is under lined/scored . Pressing the link immediately scrolls the page to the top.

The site is referenced to the HOME/ INDEX page. HTML coding of any page can be seen via the “TOOLS” tab 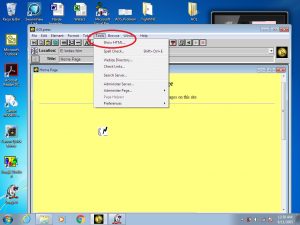 If one cares to examine the HTML coding then the “TOOLS” tab is used. 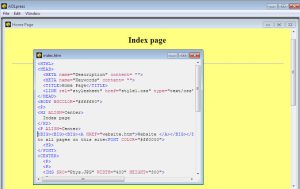 On a very basic site the pages may be viewed in a manner similar to reading a text book: 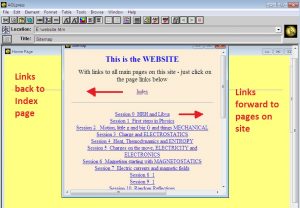 As a summary, AOLPress is still a package that can be used to build a website but many more packages are now at one’s disposal.

Once the html pages have been successfully composed the files can be up-loaded onto the website using the File Transfer Protocol (ftp) package FileZilla. 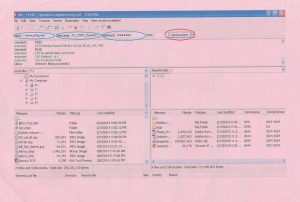 The the QUICKCONNECT will show the files on your website on the RIGHT HAND SIDE (RHS).

You can now open the file from the appropriate directory and it will appear on the LEFT HAND SIDE. By highlighting the file and making a right click the “Up-load” tab will appear. Press ENTER and the file transfers to the RHS.

Where a file is corrected the software will ask “do you wish to over-write your original file?” and a YES click will up-load the new file.

go to top of page