The millennium 2000 will go down in history as the most turbulent of all times. The twin towers (in New York) bombing put events into chaos. Bush and Blair took it into their heads to invade Iraq and this led to the whole mis-adventure of the Arab Spring.

Iraq, Libya and Syria are now in periods of great instability. The Taliban are back again in charge of Afghanistan after the sad loss of life of many military personnel.

The sound of the year 2020 was pleasing to the ear – was it going to be a good year? It started well as my wife and I, with friends, went to the New Year’s concert at the Bridgewater Hall, Manchester.

January came and went and February was quite mild from the weather angle. BUT there were ominous stirrings from China – a virus was spreading and the big question was “was it going to stay in China or become a worldwide issue?” I was going to take my grandson for a SUSHI meal in Manchester at Piccadilly station on the 12th March but his Mum (Ruth) strongly advised against travelling on the train – “the COVID 19 virus is spreading rapidly” she said ” and you must avoid mixing with people” — Ruth  is a General Practice doctor and knew much more about COVID than the public.

Almost six months into the year we have witnessed the horrific progress of the virus in the UK which has claimed more than 40.000 live. What have we done wrong when many countries have witnessed far fewer deaths counted in hundreds not thousands. Has the present government been so inept? A considerable number of people were alarmed at the power exerted by Dominic Cummins – should a non-elected person dictate policy directions which lead to disaster?

I remember an article many years ago in the Times, Oct. 19 1970, in which Michael Shanks described how Mr Heath was giving a new structure to Whitehall so that industry and the Civil Service could be run more efficiently. 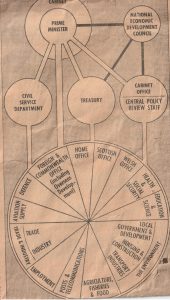 (please note, the word above the PM is CABINET)

One may ask “What framework is the New Government operating under?” If the linkage between Boris Johnson and Dominic Cummins is so strong that all the advice given by the medical world (my daughter was advocating lockdown in early March) has been ignored in February and March then these two gentlemen must accept a huge accusation of guilt for letting the pandemic spread out of control in the UK.

Politics aside, any government that places the country in such a precarious position should be subject to sever scrutiny as their  behaviour, in the short term, has caused great sorrow for the families, relatives and friends of people who have died. The longer term effects on the economy and the standing of Britain in the world are unimaginable.

It is just an insult to the citizens of this country to have the highest total deaths of any country in Europe. Surely a democratically elected government should have given the UK a better deal.

The COVID-19 vaccines currently approved for use in the UK are:

and this did cause a little discomfort.  But I will never be an ANTI_VAXER as I hold medical advances in very high regard.

Putin’s war against Ukraine started in February 2022 – what manner of man is this?